JB Library script loader and the start of a new library

One of the biggest headaches developers and site builders see when developing jQuery functionality within joomla is a javascript conflict that results from multiple versions of jQuery loading on a page. This is mainly triggered in cases where script declarations are declared after the $ name space has been re-declared by another javascript library.

Technically, jQuery should be able to load as many times as you want on a page - although best practice is to only load one. Even with multiple instances of the jQuery library loading on the page, it's core functionality should remain unaffected. However because Joomla components, modules and plugins are triggered at different times during a page render and because there are a few different ways to include assets within that rendering, it's not always possible to control the exact order that scripts are loaded on the page and so we often end up with a jQuery conflict.

Joomla 3.0 changes this of course via the native jQuery behaviours, and while for the most part you will not need to use JB Library in Joomla 3.0, for earlier versions of Joomla, solutions such as a script loader are a good way to get around the issue.

Controlling the order files are loaded on the page. 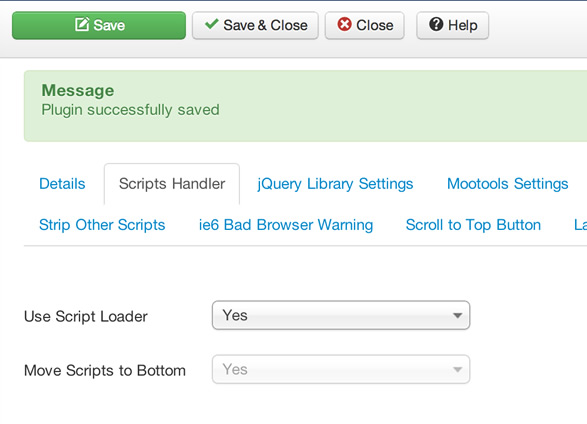 When the script loader function is enabled the javascript assets on the page are loaded in the following order.

The beginnings of the new Zen library

This version of the library also includes the beginnings of our new Zen library. The Zen library is a collection of tools that we have designed to replace or at least combine a lot of the shared functionality between the Zen Grid Framework and the JB Library plugin. This means that our codebase will become more unified and it will hopefully free up some of the dependancies currently required by our extensions. The intention is centralize some classes, methods or behaviors in libraries, so we can share code between our Joomla extensions and framework to keep our codebase as clean as possible.

Cases where you would use JB Library in Joomla 3.0

When JB Library for Joomla 3.0 was first announced I mentioned some reasons why you would use JB Library with Joomla 3.0.