T3 and Zentools updated for Joomla 3.2

You may have seen the announcement that Joomla 3.2 is now available and from the looks of the feature list, it looks like it's an excellent update to an already great version.

If you are using T3 and Zentools then you need to update to the latest versions of T3 and zentools for a few key compatibility fixes in the plugin and the module. You can grab the updates from the links below.

You can find the official announcement of Joomla 3.2 on the main Joomla.org site. In a nutshell the update adds the following key features:

Update: This issue has now been fixed and so users who have their update status to the long term release cycle should be notified of the available updates.

Last week when the update to Joomla 3.0.3 was announced, I headed straight to the update manager on my sole live instance of Joomla 3 to test out the new update workflow on a live site.

Unfortunately after I purged the cache and checked for new updates there were no updates to install.

I scratched my head for some time wondering what I had done wrong, checked the version of Joomla 3 I was using, and then I remembered that the Joomla release cycle now has two streams - short term and long term.

The update manager is set to notify users of long term release updates by default and so in order to get notified of these small (and very important security updates) you need to have the update manager set to short term support updates.

Stay up to date with our releases.

As a little reminder if you want to keep track of our Joomla template and extension releases there are two key places to look:

Given that maintaining packages across three versions of Joomla is a somewhat staggering task and that we will (hopefully) start to ship a Joomla 3.0 version and quickstart of the next Joomla template we need to draw a line in the sand in regards to support for Joomla 1.5. This will free us up to focus on some more progressive development of our templates, extensions and framework.

Our free Joomla typography plugin is now available for Joomla 3.0 and now also comes with built in syntax for the Bootstrap glyph icons. You can download JB Type over at the JB Type plugin page.

In anticipation of making the move to Bootstrap in the next few months, I have also included some of the bootstrap glyph icons into the array of icons available with the plugin.

Although the new fonts will work out of the box in Joomla 3.0, if you want to use the new icon syntax in Joomla 2.5 or Joomla 1.5 you need to ensure that you have the Bootstrap css and assets loading on the page.

Thankfully @phpRoberto has put together an excellent little plugin that will do this for you in Joomla 2.5. So to use the new icons in Joomla 2.5 you need to install JB Type as well as the twitter bootstrap plugin for Joomla 2.5.

This version is a complete rewrite of the original codebase and contains a number of improvements, enhancements and code optimisation. You may not notice much in the way of new features but this version of the library will play alot better with other extensions and work more efficiently when it comes to controlling jQuery and mootools on your site.

jTweet is now available for Joomla 3.0

Our fourth free Joomla 3.0 extension is the free Joomla Twitter module, jTweet. If you missed the announcement regarding version 2 all those months ago, jTweet v2 features a ton of new features and improvements, including drag and drop templating, new theme options, intelligent iterface and more.

Some of my favourite photos taken from my very own Canon 7d.

No Need for JB Library or the framework ...

Please note that as of Joomla 3.0 JB Library or the framework is no longer a requirement for this module. So you should be able to happily install this module and Joomla 3.0 will take care of the rest.

Our simple and free Google map module is now available for Joomla 3.0. If you haven't used the module before check out the way we used it in the Ascent Joomla template demo. 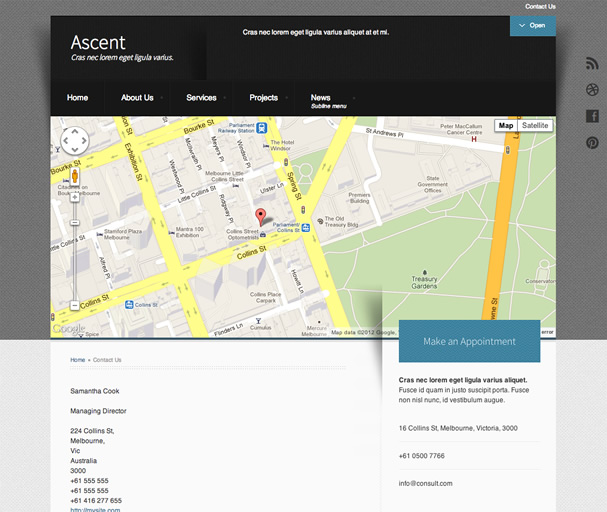 You can download JB Maps from the JB Maps feature page.

Our responsive video plugin for Joomla is now available for Joomla 3.0.

As I discussed in the Zentools post all Joomla 3.0 packages will be available combined with the Joomla 2.5 version while the Joomla 1.5 version is in it's own separate package.

You can download the fitvids plugin on the Fitvids feature page.

Zentools for Joomla 3.0 is (almost) ready.

I've just uploaded an updated version of our Zentools module which fixes an issue with K2 2.6. Perhaps more importantly though it also able to be installed on Joomla 3.0. Members can download the package from the Zentools download page.

For the record I think this is a good decision, but it just means some slight discomfort while we still support Joomla 1.5. This will make it easier to drop the Joomla 1.5 version when we eventually stop support for Joomla 1.5 with our templates and extensions.

This is also the case for all of our extensions which we will start rolling out in J3.0 versions in the next day or so.

Things to love about Joomla 3.0 - Part One

The more I dig into Joomla 3.0 the more I love this new version of Joomla.

Rather than compiling all of these things into a single ten things about Joomla 3.0 type post, I'm going to start a new series of microblogs around Joomla 3.0. It's easy enough to read the specs on the Joomla 3.0 landing page, but how do these new features bear out when you are actually using them?

Using Joomla 3.0 in the real world.

I've just spent the last hour or so preparing the sample data that we use for our Joomla templates and in that time I've found a new appreciation for the work that the Joomla 3 UX team have put into revamping our much loved CMS.

While I think that, in general, there could be a little more visual hierarchy employed in the interface - I'm sure that will come as the 3 series develops - there are some things that are simply 1000% better than the preceeding versions of Joomla.

Selecting a menu type is number one on my list.